Two years ago I started running.  In that time I have run a 5k, a 10k, two half marathons, and 3 marathons.  In those runs I always wondered, how much farther can I push it.  They all hurt, to some extent, but how long can I put up with the pain, How long can I embrace the suck, and keep going?

To try to answer this question, I “ran” the Wild Duluth 100k.  Originally I was going to run the 50k, but my friend Andy talked me into switching to the 100k, He was going to be running it and said he thought I could do it.

It was a definite baptism by fire for this aspiring ultramarathoner.  I got to the start at about 0530, met up with my friend Andy, and waited for the race briefing.  The briefing was quick, making sure that people knew what color flags to look for , and that was about it, we lined up and were off.

Start to 24th Ave TH. 3.1 Miles (5Km)
The first three miles are a doozy, giving over 300 feet of elevation, most of which is in mile 2.  Despite this, it felt good.  I followed the line of runners along with Andy, got to the top of the climb at Enger Tower, range the peace bell and headed for a nice gentle downhill to the first aide station where my buddy Jay was waiting.  With a quick bottle swap from Jay, I was on my way.  As I passed Andy I told him I'd see him in 5 minutes.  I didn't see him again for another 7 hours..... Such was the day 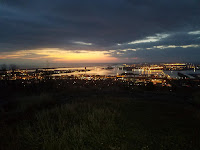 I THINK this was the section I was on when it started raining, but I really don’t rememberThis section was a bit more difficult, it started downhill, but then went right onto another of the mongo climbs.  Definite rolling hills and some very pretty views of the of the city of Duluth  I seriously don’t remember too much about this section, other than it was a bunch of vertical, and was run half in the dark.  Section ended on another down hill.

Highland to Spirit Mountain AS 4.9 miles (7.9Km)
More ups and downs, yay!  Another downhill to start, and another steep, nasty climb right after that.  More rolling, up and down… Starting to see a pattern here?  Section included going down the stairway to heaven, 150 steps built into a steep hill.

Spirit Mountain AS to Magney-Snively 2 miles (3.2Km)
OK, this was a short section, but that doesn’t mean it was easy!  All uphill, with a few minor dips, but that’s it.  It was short and it was painful, but I got it done.

Magney-Snively AS to Munger TH AS 4.3 miles (6.9Km)
This one was a doozy, up and over Ely’s peak in Duluth.  Super technical, and a lot of elevation.  It’s also one of my favorite sections on the run. The views of Duluth make the pain more than worth the while.  This was a slow section, the mud and slippery rocks made for hard footing for me, and the other runners.  I ran into several people I knew on this section.  The short conversations in passing really helped boost my spirits.Because it’s an up, over and down, the elevation really doesn’t show

Munger TH AS to Grand Portage AS. 5.6 miles (9Km)
Another section, another set of relentless, rolling yet steep hills. I don’t remember a lot of this one, other than it’s where I really first started to feel a little slow, despite managing a 15:27 average pace.
Split elevation: 840 feet

Grand Portage AS to Chambers Grove Turn Around 5.4 miles (8.7Km)

This section SUCKED!!!!!  Almost immediately I hit Purgatory, which is a set of 2 power line hills I had to ascend both on the outbound leg.  Both are about 45% grade and both have about 100 feet of elevation.  Oh, did I mention that the hills were muddy?  Imagine mud that is super thick, super slick, and super sticky.  Then, make it on a downhill where there are THORNY bushes on both sides of the trail.  Yeah, that’s what I hit.  Those hills really slowed me down, but, somehow, I managed sub-17 pace for the split, making up time on the hiking and mountain bike trails.  It was in here that my watch started freezing… ugh.  I was also starting to Bonk, my plan to use Tailwind had worked great up until the pont where I had forgot to bring a refill for the Grand Portage AS.  This was my first low spot on the run, it would not be my last.

Turn around!  I was really bonking at this point,  I had been using tailwind for fuel, pretty much exclusively, and swapping empty for full bottles at every aide station.  Problem was, they really weren’t allowing creaw at the Grand Portage AS, so I went 11 miles on 5 miles worth of Tailwind.  I was STARVING… Those ripple potato chips were the most amazing thing in the world!  Now it’s back on the trail.

Section descriptions are going to be more brief from here on out, since it’s the same places, in reverse.

Chamber’s Grove to Grand Portage
I really took it easy coming up and out of Chambers Grove, made some phone calls and let the chips and Coca-Cola settle.  On the mountain bike trails I ran into my buddy Andy again, he was on his way into the turn around.  It was nice to see him and get to say before heading out on my own again. Not much to say other than, the frickin power lines were even muddier, I totally butt scooted down the hills, getting a fair collection of scrapes and thorn holes in the process.

Grand Portage to Munger
Another 5.4 on relatively “ easy” trails.  Feeling pretty tired and definitely wet and muddy.  At the Munger trail TH I swapped into clean/dry shoes and socks and picked up Nikk, my pacer, got some more Coke from Gretchen, who was #1 female at Superior 100 and Nikk and I took off over Ely’s peak.

Munger TH to Magney-Snively
I was really hurting by this point.  It was more walking/trudging than running now.  Nikk was invaluable, he kept me going, kept me distracted and kept me motivated.  It started getting dark on this section, so it was back to headlamps!

Spirit Moutain to Hiland/Getchnell
This was 5 plus miles of torture!  Back on those releltless rolling hills, and in the dark, and totally ripped up, muddy trails, including going UP the staI was feeling pretty dead, but I did get in before the 2130 cut off, so that made me happy

Highland/Getchell to 24th street.
Watch started dying at this point, so I don’t have good info other than God did that suck.  Nikk went with Jay to meet up with me for the last push, so I was alone for 5.7 of solitary torture.  I knew I was going to push through, but it was hard.  One bright spot, as I was coming to a tunnel where the Superior Hiking Trail goes under a road, Brian was there with 2 Little Casear’s Hot N’ Ready pizzas.  Fueled by a slice of cheese I took off only to promptly take a wrong turn and waste about 20 minutes finding the correct trail….GGGRRR.  Somewhere in here I started feeling sorry for myself, I'm happy Nikk wasn't there to see it, I was pretty mopey, trudging through the mud in the dark.  But then the song Voice of Truth by Casting Crowns popped into my head.  With the lyrics floating through my consciousness I was able to keep on going, albeit slowly.

24th street to Bayfront finish.
Met up with Nikk for the final push and we were off.  I was totally dragging at this point, I had come into the AS45 minutes behind where I wanted to be and only had 30 minutes until cutoff… 3 minutes to run a 5k on legs that had just run 59 miles…… It was slow going, first going uphill, then back down for the final push.  There was more walking than I’d like to admit.  Between both calves acting up, quads that were getting a little crampy, a headlamp with a slowly dying battery and, well, just being exhausted, I was not in any condition to run it.  We made it down the nasty trail hill and to the paved path for the end, where that big meanie Nikk made me RUN the last half mile.  Probably a good thing.  I may have felt like hell, but at least I proved to myself that I had enough left in the tank to make the end look good.

Waiting at the finish were my buddies Jay and Andy, and Brian, that amazing man who sat on a lawn chair in a tunnel to give pizza to tired runners.  I received my finisher's mug and hat (which I'm not really sure I deserve), got some chocolate milk and promptly got into my truck and drove to the hotel to crash... not a very auspicious end to my first ultra.
Official time was 18 hours 15 minutes and 51 seconds to complete my first Ultra distance.

This took me a week to put together and publish because, well, I really didn't know what to think of my first ultramarathon experience.  I've gone through a week highs and lows to match the highs and lows from the run it'self.  I have the fact that I was part of the 50% of the field that finished the race.  How did I manage to do it when stronger, better runners didn't?  How much of it was sheer dumb luck?

Then there was the high.  I did it!  On my first shot at an ultramarathon, I went for 100k and got it done.  Super stoked, and I look at it as one of the biggest accomplishments in my life.  Yet I'm having a hard time with coming in after cut off.  I guess a "real" ultramarathoner wouldn't count this, but I got the distance in and the RD lists my time in the results, so I'm cinflicted. This was a lot for a novice to process.  Finally, it comes down to, I went out there, I went the distance, and I want to do it again. That will have to do for now.
at October 28, 2017 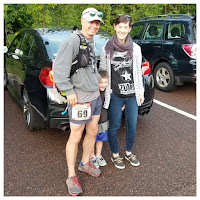